A great article and interview in The Times, on Saturday 24th October 2015, with Miles Young – the Chief Executive of Ogilvy & Mather Worldwide.

One of the things that businesses feel they should be doing is sending out email newsletters to their clients and potential clients on an ongoing basis. END_OF_DOCUMENT_TOKEN_TO_BE_REPLACED

A sales funnel is essentially the path that your customers take from initially becoming aware of your business to ending up making a purchase. 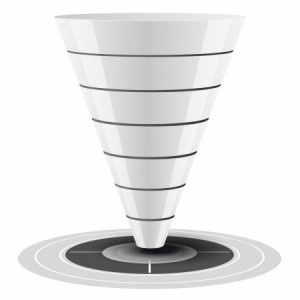 Whilst it’s a useful piece of imagery and an adequate means of describing the process, I’ve always thought there was something a little misleading about the use of the word “funnel” in this regard. For instance, when using a funnel to pour liquid from one bottle into another, the idea behind that process is to get all the liquid from the first bottle into the second one, with the funnel acting as a “widemouth” catcher for the liquid, that it then pours directly into the second bottle without spilling any.

However, unless your business operates like no other that I’ve every encountered, you certainly won’t be converting all your sales prospects into customers, and plenty of them will be “spilt” out of the funnel on the way towards making those all important sales.

I guess the origin of calling this sales journey a “funnel” lies in the shape of a funnel, as pictured above. When we look at the volume of people you could describe as sales prospects, then filter them down through the different stages of the sales process, what we see is a kind of inverted pyramid shape, with the largest number at the top and the smallest at the bottom.

OK, all very good, but so what? Well, the point of what I’m saying is that it’s far too easy to neglect each stage in the “funneling” process, simply believing that a large number of prospects at the top is certain to lead to our eventual goal of sales at the bottom. But actually we can help ourselves by making each stage as good as it can be – promoting ourselves and interacting with potential clients several times in order to turn them into happy customers. These stages can include:

– Search engine results or social media posts leading to a site visit
– An engaging website that provides what the visitor is looking for
– An easy method of contacting you
– Possibly providing something of value to the potential client before they pay you anything – thus building up credibility and trust
– Email communication with potential customers on an ongoing basis (being “front of mind” can be a powerful motivator for when the prospect is ready to buy)
– A simple and confidence-inspiring sales process
– A friendly and useful after sales process to keep them on side (whether they are likely to come back for more or not, they can certainly refer others)

So when you think about your sales funnel, you shouldn’t be imagining it will be as simple as pouring liquid into a bottle, so you need to ensure there are no holes in the funnel itself to prevent as much leakage as possible.